This article appeared in our local newspaper today--a wonderful tribute to my Dad. 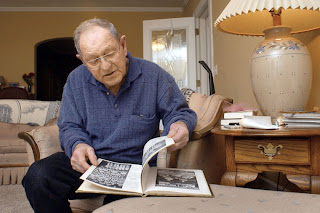 The death of Fairmount resident Robert Pulley last Sunday was not only a loss for the community but the world at large, according to local officials.
As the last living pallbearer for James Dean’s funeral, Pulley, 81, had been one of the people who helped to keep Dean’s memory alive over the decades.
Pulley and Dean both graduated in the 1949 class of Fairmount High School. After Dean’s death in 1955, Pulley found himself sharing stories of Dean’s life with fans and media members.
Gale Hikade, president of the Fairmount Historical Museum, said Pulley had a key role in the museum’s early development and in the growth of the James Dean Festival.
“There was a time when there weren’t any volunteers and someone had to take it upon themselves to do everything it took to have a museum — to be there to open, to stock the gift shop and countless other duties,” Hickade said. “Bob was that person for a number of years. He was a great ambassador for Fairmount and James Dean. I enjoyed him. He was a delight to talk to and a wealth of information not just about James Dean but about Fairmount.”
In 1999, Pulley had lung cancer surgery, and other illnesses stopped his participation in recent years. However, legions of people remember the man who was often the first person to greet a James Dean fan on his or her visit to Fairmount.
“The James Dean Remembered Fan Club has lost a cherished friend and champion,” club president Pamela Crawford of Arkansas wrote on Facebook. “Bob was always so giving, so loving and so welcoming to Jim Dean’s fans. He is irreplaceable.” She said he reached fans around the “globe.”
Pulley’s widow, Shirley Pulley, said he was committed to clarifying who James Dean was, especially to the media. He made guest appearances on “20/20,” “Hardcopy,” “Joan Rivers” and “Geraldo Rivera,” and was interviewed by a reporter from Fox news.
“He really defended Jimmie from a lot of things that weren’t true,” she said.
In an October 1990 article in People magazine, Pulley admitted he couldn’t figure out why Dean was so popular.
“I don’t understand it,” he told the magazine. “Jimmy was just a normal boy.”
One-on-one, Pulley simply enjoyed sharing memories of Dean with fans, who never seemed to tire of hearing stories. They would come to the museum and end up at their former home, which was located near Madison-Grant High School. Once some visitors who got their car stuck in Park Cemetery at the James Dean grave were helped by Pulley, and then invited home.
“We had people from Germany, England, South Carolina and other places come visit. Many of them ended up staying with us while here,” Shirley said. “For the 50th anniversary, Dario Mazzoli who starred in ‘Rebel Without a Cause’ came with his wife and stayed with us.
“Bob always said that he did a lot for James Dean as far as keeping it going, but James Dean did a lot for him.”
One of Pulley’s daughter’s, Marion businesswoman Christy Berry, said she was constantly bringing home friends to the James Dean Festival while she attended Ball State University. And her father shared his stories with them as well.
“The ceiling of our dorm room was covered in James Dean posters,” Berry said, smiling. “I had forgotten how many of them came home with me until they started posting condolences on Facebook.”
Pulley was also known around town from his 35 years of service to the Citizen Telephone Company, which became Frontier Communications. He offered his electrical skills when needed.
David Loehr, owner of the James Dean Gallery in Fairmount said “When the James Dean Gallery was first getting ready to open in 1988, Bob was enthusiastic and offered to help with some of the electrical work and installed much of the track lighting that is still in use in the exhibit.
“Over the years Bob also appeared in several documentaries about James Dean and as a result was known and recognized by Dean fans around the world,” Loehr said. “When fans would visit Fairmount he would never turn away someone who wanted to meet him and talk about his old high school pal Jim Dean.
“When the bust of James Dean was dedicated at the Griffith Observatory in Los Angeles, Bob flew out and we attended the event together along with several of Dean’s co-stars from the films and other celebrities along with dozens of James Dean Fans who treated Bob like he was a celebrity himself.”
Like Dean, he had eclectic tastes, and picking up arrowheads led to an interest in collecting items from Papua New Guinea.
Pulley sometimes shared memories during the annual memorial service for Dean at Back Creek Friends in Fairmount. People heard about hockey games on the frozen pond of the Winslow farm, and how they would try to trip each other with their sticks. He would wear his senior cords, a tradition Dean had also participated in. Movies were 5 or 10 cents, and you needed a car to get anywhere outside of Fairmount.
Another classmate of Pulley’s, Fairmount resident Jim Grindle, said Pulley will be missed. The men served as judges together at the James Dean Look-Alike Contest at the festival. Determining the winner was always a challenge.
“There’s not many people that look like Jimmie,” Grindle said. “Every one in awhile you’ll catch the eyes or a gesture. They’ve all studied his movies. We’re looking for (how he looked) in his high school days.”
Pulley had a lifelong interest in local schools, said granddaughter Mallory Thompson, a teacher at Madison-Grant Junior High School.
“He was very, very generous,” Thompson said. “He would worry about my students. He was constantly asking me about families and offering his help when needed.”

So sorry to read the loss of your father. What a great and very interesting tribute! Prayers and hugs in this difficult time!
Liz

((((HUGS))) Such a wonderful man...They just don't make men like that today...well not many...It is great that he will be remembered in such a great way.
Prayers to you and your family 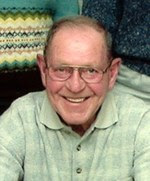 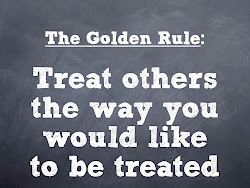 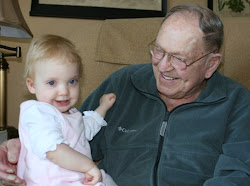